This digital dataset defines the depth of the Corcoran Clay Member of the Tulare Formation. The complex hydrologic system of the Central Valley is simulated using the USGS numerical modeling code MODFLOW-FMP (Schmid and others, 2006b). This simulation is referred to here as the Central Valley Hydrologic Model (CVHM) (Faunt, 2009). Utilizing MODFLOW-FMP, the CVHM simulates groundwater and surface-water flow, irrigated agriculture, land subsidence, and other key processes in the Central Valley on a monthly basis from 1961-2003. Numerous lenses of fine-grained sediments are distributed throughout the southern Central Valley (San Joaquin Valley) and generally constitute more than 50 percent of the total thickness of the valley fill. Generally, these lenses are discontinuous and not vertically extensive or laterally continuous. However, the Corcoran Clay is a low-permeability, areally extensive, lacustrine deposit (Johnson and others, 1968) as much as 200-ft thick (Davis and others, 1959; Page, 1986). This continuous clay divides the groundwater-flow system of the western San Joaquin Valley into an upper semi-confined zone and a lower confined zone (Williamson and others, 1989; Belitz and Heimes, 1990; Burow and others, 2004). The extent and distribution of the Corcoran Clay was defined for use in the CVHM because the unit is one of the few deposits in the Valley that can be regionally mapped. The CVHM is the most recent regional-scale model of the Central Valley developed by the U.S. Geological Survey (USGS). The CVHM was developed as part of the USGS Groundwater Resources Program (see "Foreword", Chapter A, page iii, for details). 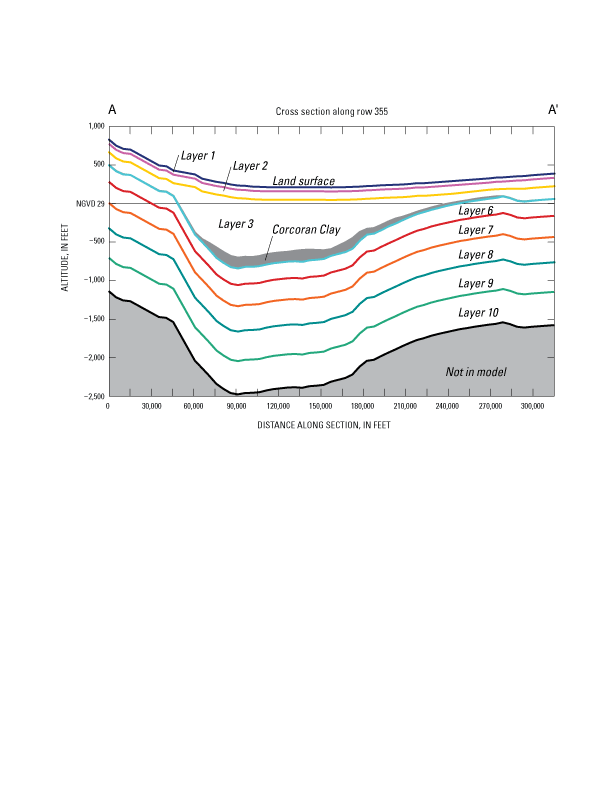