This digital dataset defines the well locations, perforated intervals, and time series of hydraulic-head observations used in the calibration of the transient hydrologic model of the Central Valley flow system. The Central Valley encompasses an approximate 50,000 square-kilometer region of California. The complex hydrologic system of the Central Valley is simulated using the U.S. Geological Survey (USGS) numerical modeling code MODFLOW-FMP (Schmid and others, 2006b). This simulation is referred to here as the Central Valley Hydrologic Model (CVHM) (Faunt, 2009). Utilizing MODFLOW-FMP, the CVHM simulates groundwater and surface-water flow, irrigated agriculture, land subsidence, and other key processes in the Central Valley on a monthly basis from 1961-2003. The USGS and CA-DWR maintain databases of key wells in the Central Valley that are web-accessible (http://waterdata.usgs.gov and http://www.water.ca.gov/waterdatalibrary/, respectively). These data were combined to form a database of available water levels throughout the Central Valley from 1961 to 2003. More than 850,000 water-level altitude measurements from more than 21,400 wells have been compiled by the USGS or CA-DWR and have been entered into their respective databases. However, only a small portion of these wells have both sufficient construction information to determine the well-perforation interval and water-level measurements for the simulation period. For model calibration, water-level altitude data were needed that were (1) distributed spatially (both geographically and vertically) throughout the Central Valley; (2) distributed temporally throughout the simulation period (years 1961-2003); and (3) available during both wet and dry climatic regimes. From the available wells records, a subset of comparison wells was selected on the basis of perforation depths, completeness of record, climatic intervals, and locations throughout the Central Valley. Water-level altitude observations (19,725) for 206 wells were used as calibration targets during parameter estimation. The CVHM is the most recent regional-scale model of the Central Valley developed by the U.S. Geological Survey (USGS). The CVHM was developed as part of the USGS Groundwater Resources Program (see "Foreword", Chapter A, page iii, for details). 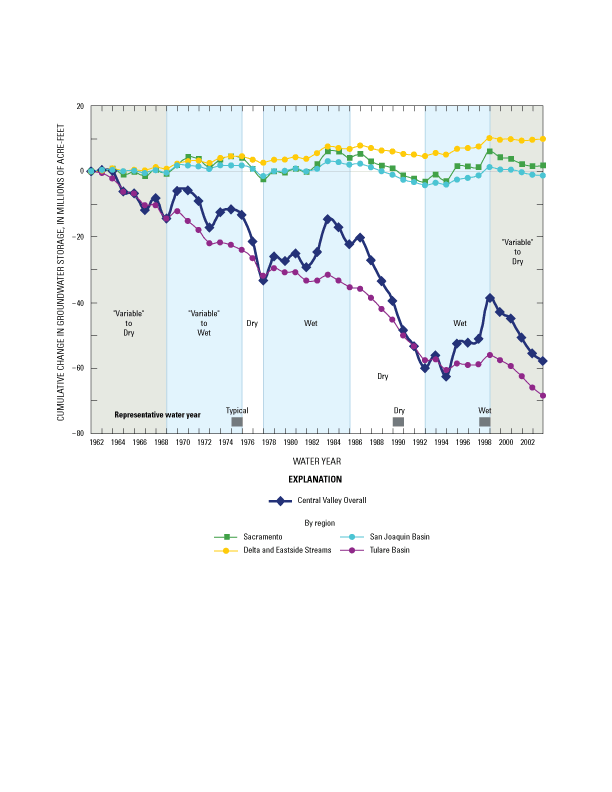