The enhanced National Land Cover Data 1992 ("NLCDe 92") served as the primary source for nationally consistent mapped land cover during the first decade of sampling for the National Water-Quality Assessment (NAWQA) Program of the U.S. Geological Survey (USGS). This 30-meter (30-m) resolution digital map was developed by overlaying USGS's original satellite imagery-based 1992 National Land Cover Data ("NLCD 92") with selected classifications from USGS's aerial-photograph-based Land Use and Land Cover (LULC) data of the 1970s to mid-1980s. The LULC data set were combined with NLCD 92 because 1) some land land cover types important to NAWQA were not fully represented in the NLCD 92 and 2) the LULC data set is accepted as a better source of information for certain land cover types that are difficult to interpret from satellite imagery alone. Decision rules were used to modify the NLCD 92 data set based on the co-located LULC data on a cell-by-cell basis. The LULC classifications that were used to develop NLCDe 92 were "Residential," "Orchards, Groves, Vineyards, Nurseries, and Ornamental Horticultural Areas," and all 5 classifications of Tundra. Although NLCDe 92 is nominally referenced to 1992, it generally represents conditions in the early 1990s, the time period when the majority of the imagery for NLCD 92 was captured. 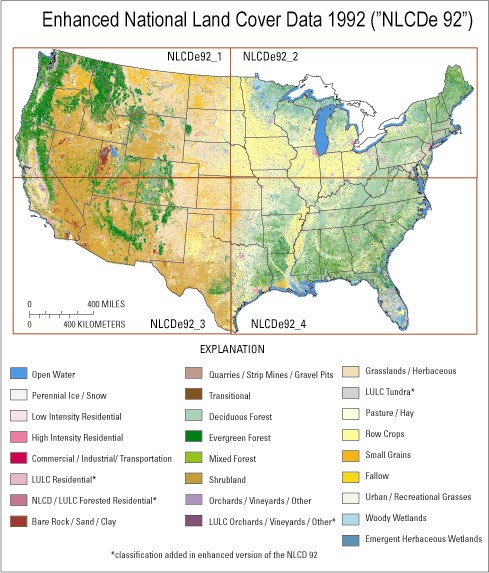