This digital dataset describes the location of 21 extensometers used for observations of subsidence in the Central Valley Hydrologic Model (CVHM). The Central Valley encompasses an approximate 50,000 square- kilometer region of California. The complex hydrologic system of the Central Valley is simulated using the USGS numerical modeling code MODFLOW-FMP (Schmid and others, 2006). This simulation is referred to here as the CVHM (Faunt, 2009). Utilizing MODFLOW-FMP, the CVHM simulates groundwater and surface-water flow, irrigated agriculture, land subsidence, and other key processes in the Central Valley ]on a monthly basis from 1961-2003. The total active modeled area is 20,334 square-miles. Water levels, water-level altitude changes, and water-level and potentiometric-surface altitude maps; streamflows; boundary flows; subsidence; groundwater pumpage; water use; and water-delivery observations were used to constrain parameter estimates throughout the calibration of the CVHM. Measured compaction from data collected by extensometers in the valley was used as a subsidence calibration target. Subsidence monitoring observations can provide valuable information about hydrologic parameters such as elastic and inelastic skeletal specific storage. The CVHM was adjusted to fit the range of measured compaction at the extensometer sites utilizing UCODE-2005 (Poeter and others, 2006) and manual calibration. The calibration target was the measured compaction from several extensometers in the region. Compaction though delayed drainage and re-pressurizing of aquitards was not simulated. The CVHM is the most recent regional-scale model of the Central Valley developed by the U.S. Geological Survey (USGS). The CVHM was developed as part of the USGS Groundwater Resources Program (see "Foreword", Chapter A, page iii, for details). 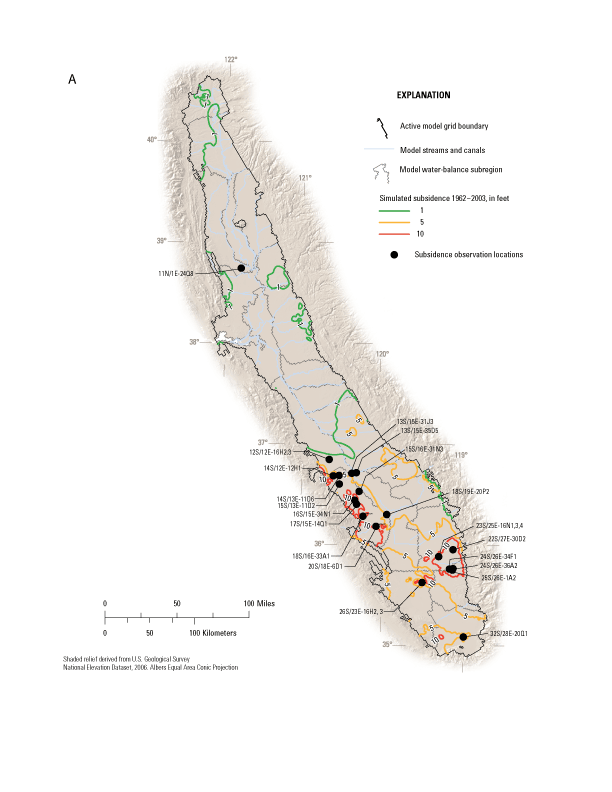