This map was created as part of a worldwide series of geologic maps for the U.S. Geological Survey's World Energy Project. These products are available on CD-ROM and through the Internet. The goal of the project is to assess the undiscovered, technically recoverable oil and gas resources of the world. Most of the source data for this map compilation were digitized from the Geologic-Tectonic Map of the Caribbean Region by J.E. Case and T.L. Holcombe, at a scale of 1:2,500,000. For data management purposes, the world was divided into eight energy regions based on political boundaries and corresponding approximately to the economic regions of the world as defined by the U.S. Department of State. Region Six encompasses the Caribbean area, Central America, and South America. Other products are also available related to Region Six, including the Geologic Map of South America (USGS Open File Report 97-470-D). Countries listed below are shown whole or in part within the map extent of the Caribbean region: Anguilla Antigua and Barbuda Aruba Bahamas Barbados Belize British Virgin Islands Cayman Islands Colombia Costa Rica Cuba Dominica Dominican Republic El Salvador Grenada Guadeloupe Guatemala Guyana Haiti Honduras Jamaica Martinique Mexico Montserrat Netherlands Antilles Nicaragua Panama Puerto Rico St. Kitts and Nevis St. Lucia St. Vincent and the Grenadines Trinidad and Tobago Turks and Caicos Islands United States Venezuela Virgin Islands The world was previously divided into geologic provinces for the World Energy Project, of which a subset is shown on the map. Each province has a set of geologic characteristics that distinguish it from surrounding provinces. These characteristics may include dominant lithologies, the age of the strata, and/or structural type. Each province is assigned a unique number and may fall within two or more countries or assessment regions. The World Geographic Coordinate System of 1984 was used for data storage and map display. Other details about the map compilation and data sources are provided in several metadata formats in the data section on this CD-ROM. Various software packages were used to create this map including: Environmental Systems Research Institute, Inc. (ESRI) ArcGIS 8.3, ArcInfo software, Adobe Photoshop CS, Illustrator CS, and Acrobat 6.0. 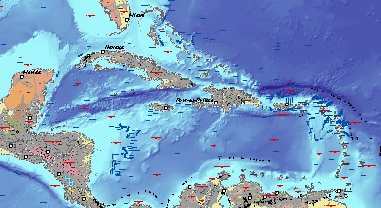