An existing three-dimensional model (MODFLOW-2000) by Petkewich and Campbell (2007) was updated to simulate potential changes in groundwater flow and groundwater-level conditions caused by injecting reclaimed water into the Middendorf aquifer in Mount Pleasant, South Carolina. The model was recalibrated to conditions from 1900 to 2008. Simulations included a Base Case and two injection scenarios. Maximum pumping rates were simulated as 6.65, 8.50, and 10.5 million gallons per day for the Base Case, Scenario 1, and Scenario 2, respectively. The Base Case simulation represents a non-injection estimate of the year 2050 groundwater levels for comparison purposes for the two injection scenarios. For Scenarios 1 and 2, the simulated injection of reclaimed water at 3 million gallons per day begins in 2012 and continues through 2050. The flow paths and time of travel for the injected reclaimed water were simulated using particle-tracking analysis. This USGS data release contains all of the input and output files for the simulations described in the associated model documentation report (https://pubs.usgs.gov/sir/2009/5185/). With this data release compilation, a small number of errors were found and corrected with the published model. River elevations were modified in 45 cells and elevations were modified in 15 Constant-Head Boundary cells. This data release also includes MODFLOW-2000 source code. 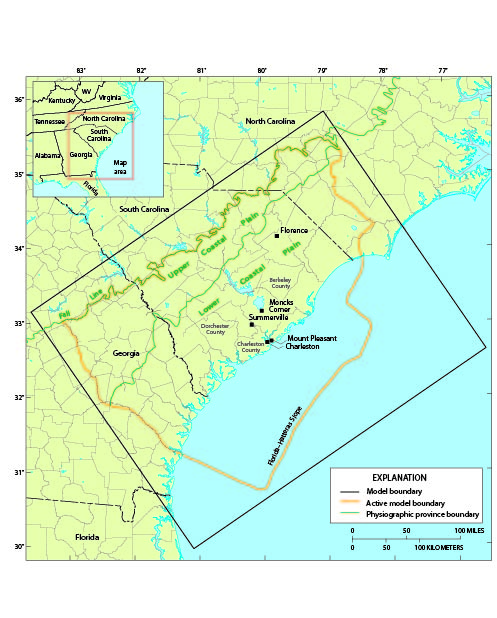