The Orbiting Carbon Observatory -3 (OCO-3) was deployed to the International Space Station in May, 2019. It is technically a single instrument, almost identical to OCO-2.

OCO-3 "Early" version is an expedited version intended for provisional familiarizing with the instrument spectral and calibration properties.

The Orbiting Carbon Observatory is the first NASA mission designed to collect space-based measurements of atmospheric carbon dioxide with the precision, resolution, and coverage needed to characterize the processes controlling its buildup in the atmosphere.

OCO-3 incorporates three high-resolution spectrometers that make coincident measurements of reflected sunlight in the near-infrared CO2 near 1.61 and 2.06 micrometers and in molecular oxygen (O2) A-Band at 0.76 micrometers. The three spectrometers have different characteristics and are calibrated independently. Their raw data numbers (DN) are delivered correlated in time to the Level 1B process as Level 1A products. Each band has 1016 spectral elements, although some are masked out in the L2 retrieval.

This product is the output from the Level 1B process. It converts the raw instrument data numbers into calibrated radiances. This conversion is based upon files of instrument characteristics and algorithm parameters that may vary over time. In addition to calibrated radiances, the Level 1B output products have geolocation information recorded for each measurement for use in higher-level processes. 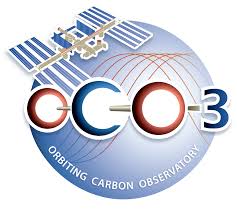