This portion of the data release presents an RGB orthomosaic image of an expanded area surrounding Whiskeytown Lake derived from Structure from Motion (SfM) processing of aerial imagery acquired on 2019-06-03. The orthomosaic is available in a high-resolution 14-centimeter (cm) version, as well as a medium-resolution 25 cm version. The high-resolution version is divided into two tiles (east and west) to reduce file download sizes. All imagery is provided in a three-band cloud-optimized GeoTIFF format, with 8-bit unsigned integer values compressed using high-quality JPEG compression. The raw imagery used to create the orthomosaic image was acquired from a manned aircraft on 2019-06-03. The acquisition flight was conducted by The 111th Group Aerial Photography, using a Nikon D850 camera. The acquisition covered two areas-of-interest (AOI) at different scales. The expanded AOI for this dataset (referred to as AOI-B) covered an area around Whiskeytown Lake up to the adjacent ridgelines. The goal for expanding the AOI for this acquisition was to create an orthomosaic image to qualitatively assess the post-fire erosion patterns in upslope areas of the drainages. The imagery for this AOI was acquired from an approximate altitude of 1,160 meters (3,800 feet) above ground level, to produce a nominal ground sample distance (pixel size) of 10 centimeters (4 inches). An onboard dual-frequency GPS receiver was used to record the precise time and position of each image. Coordinates for ground control points consisting of photo-identifiable objects were measured independently using survey-grade post-processed kinematic (PPK) GPS. 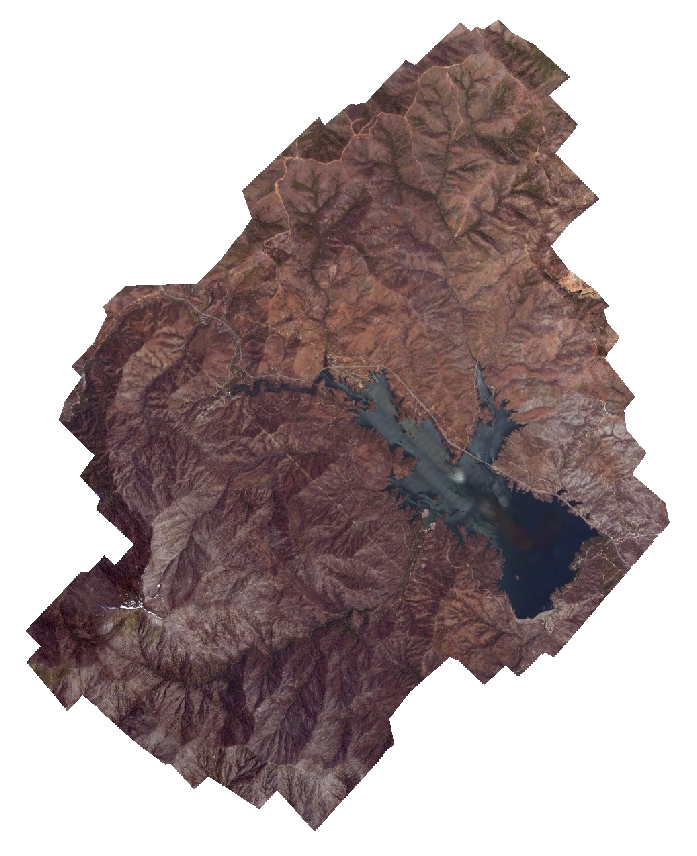