This dataset was created in support of a study focusing on ground-water resources in the Great Basin carbonate and alluvial aquifer system (GBCAAS). The GBCAAS is a complex aquifer system comprised of both unconsolidated and bedrock formations covering an area of approximately 110,000 square miles. The aquifer system is situated in the eastern portion of the Great Basin Province of the western United States. The eastern Great Basin is experiencing rapid population growth and has some of the highest per capita water use in the Nation. These factors, combined with the arid setting, have levied intensive demand upon current ground-water resources and, thus, predictions of future shortages. Because of the large regional extent of the aquifer system, rapid growth in the region, and the reliance upon ground water for urban populations, agriculture, and native habitats, the GBCAAS was selected by the U.S. Geological Survey (USGS) Water Resources program as part of the National Water Census Initiative to evaluate the Nation's ground-water availability. These data are derived from the Basin Characterization Model (BCM). The BCM is a distributed-parameter, water-balance accounting model that is run on a monthly time step. The BCM incorporates spatially distributed parameters (monthly precipitation, monthly minimum and maximum air temperature, monthly potential evapotranspiration, soil-water storage capacity, and saturated hydraulic conductivity of bedrock and alluvium) to determine where excess water is available in a basin and whether the excess water is stored in the soil or infiltrates downward into underlying bedrock. This dataset is composed of three raster layers. Two of the layers are outputs of the BCM model, one is an input. The layers are as follows: 1. Estimated average in-place recharge for the years 1940 to 2006 in the GBCAAS study area. In-place recharge is output from the BCM and is calculated as the annual mean amount of water that can drain from the soil zone directly into consolidated bedrock or unconsolidated deposits. 2. Estimated average runoff for the years 1940 to 2006 in the GBCAAS study area. Estimated runoff is output from the BCM and is calculated as the annual mean amount of water that runs off the mountain front or becomes streamflow. 3. Estimated saturated hydraulic conductivity (K) of bedrock and unconsolidated basin fill in the GBCAAS study area. The data are input to the BCM model as one of two temporally invariable inputs: storage capacity of soil and saturated hydraulic conductivity (Flint and Flint, 2007). The dataset was developed by applying assumed K values to geologic formations derived from 1:500,000-scale and 1:750,000-scale digital State geologic maps covering the study area. Hydraulic conductivity estimates of bedrock are uncertain because of the unknown hydraulic properties and spatial distributions of fractures, faults, fault gouge, and shallow infilling materials associated with different bedrock types and evaporative demand. These data are output from a model and should be used with caution. Refer to the larger work citation for details about the data and adjustments made to estimated recharge and runoff in water balance calculations made for the GBCAAS study. References cited: Flint, A.L., and Flint, L.E., 2007, Application of the Basin Characterization Model to estimate in-place recharge and runoff potential in the Basin and Range carbonate-rock aquifer system, White Pine County, Nevada and adjacent areas in Nevada and Utah: U.S. Geological Survey Scientific Investigations Report 2007-5099, 30p. 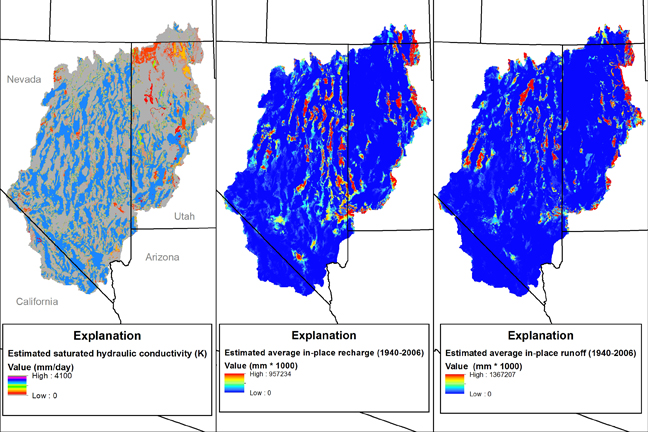