SIR2016-5029_cfwgoshor_3b: Flood Inundation Depth for a Flow of 21,450 cfs at the Gage Coast Fork Willamette River at Goshen, Oregon (Area of Uncertainty)

The domain of the model is as follows: Row River from Dorena dam to the confluence with the Coast Fork; Coast Fork from Cottage Grove dam to the confluence with the Middle Fork; Silk Creek from River Mile 1.7 to the confluence with the Coast Fork. The basis for these features is the Willamette Flood Insurance Study – Phase One (2013). The hydraulics and hydrology for the FIS were reused in the production of these polygons; the reports and information associated with the FIS are applicable to this product. The Digital Elevation Model (DEM) utilized for the Willamette FIS submittal was produced by combining multiple overlapping topographic surveys for the Middle Fork and Coast Fork of the Willamette River. This DEM was created from four sources: LiDAR of the Springfield area that was flown in 2008, LiDAR of Silk Creek that was flown in 2011, LiDAR of Fall Creek that was flown in 2012, and photogrammetry of the Middle Fork and Coast Fork of the Willamette River that was flown in 2004. In areas where no high-resolution elevation data were available, USGS National Elevation Dataset (NED) data were used to supplement the DEM. The shapefiles Hi_Res_Extents.shp and Low_Res_Extents.shp define the limits of these areas. The horizontal datum of the DEM is NAD 1983 State Plane-Oregon South HARN with units of International Feet (NAD83). The vertical datum of the elevation model is NAVD 1988 with units of international feet (NAVD-88). In addition, some areas show surveyed bathymetry within the channel. These can be noted by the sharp increase in apparent depth, creating a stripe across the depth grid when compared to the LiDAR data, which represents the water surface elevation at the time of the aerial data collection. Bridge decks are generally removed from DEMs as standard practice. Therefore, these features may be shown as inundated when they are not. An effort to clip flood extents on bridge decks was made, but judgement should be used when estimating the usefulness of a bridge during flood flow. Comparing the bridge to the surrounding ground can be more informative in this respect than simply looking at the bridge itself. The features and depth grids stop as the Coast Fork approaches the Middle Fork on the northern end of the reach. See cfwgoshOR_breach.shp for information regarding this file. This represents the depth grid for the 21,450 cfs profile. 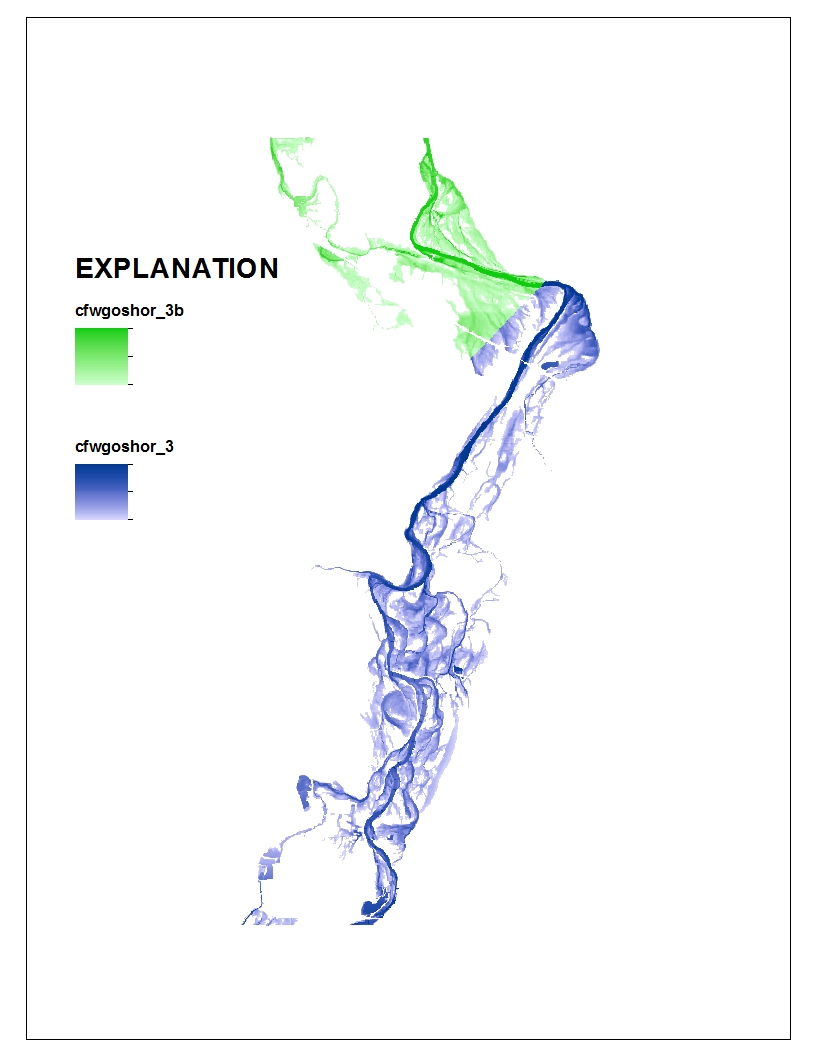