The SPURS (Salinity Processes in the Upper Ocean Regional Study) project is a NASA-funded oceanographic process study and associated field program that aim to elucidate key mechanisms responsible for near-surface salinity variations in the oceans. The project is comprised of two field campaigns and a series of cruises in regions of the Atlantic and Pacific Oceans exhibiting salinity extremes. SPURS employs a suite of state-of-the-art in-situ sampling technologies that, combined with remotely sensed salinity fields from the Aquarius/SAC-D, SMAP and SMOS satellites, provide a detailed characterization of salinity structure over a continuum of spatio-temporal scales. The SPURS-2 campaign involved two month-long cruises by the R/V Revelle in August 2016 and October 2017 combined with complementary sampling on a more continuous basis over this period by the schooner Lady Amber. Focused around a central mooring located near 10N,125W, the objective of SPURS-2 was to study the dynamics of the rainfall-dominated surface ocean at the western edge of the eastern Pacific fresh pool subject to high seasonal variability and strong zonal flows associated with the North Equatorial Current and Countercurrent. The Salinity Snake (SS) measures sea surface salinity in the top 1 - 2 cm of the water column, which is the radiometric depth of L-Band satellite radiometers such as on Aquarius/SAC-D, SMAP and SMOS satellites that measure salinity remotely. The SS consists of four key components: a 10m boom mast, a hose, which is deployed from this boom, a powerful self-priming peristaltic pump which transports a constant stream of a seawater/air emulsion, and a shipboard apparatus, which filters, de-bubbles, sterilizes and analyses the salinity of the water. The SS was deployed during both SPURS-2 Revelle cruises. SS data series are provided in netCDF file format, one per cruise. 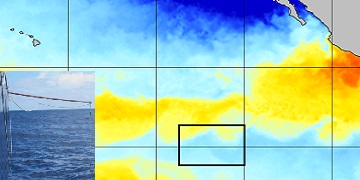